How did new twitch creator IamHloyal fights for equality, has Xbox Insiders outraged with Destiny 2 clip.

How does a twitch content creator get into an open forum about race equality?
After our William B Harris Jr also known in the gaming, and social media community as Iamhloyal, after posting clips for his twitch live stream, got the idea to drop a clip and was inspired to post a self-inspired move in the free-to-play multiplayer first-person shooter game originally developed by Bungie who was recently bought my PlayStations.  The highly loved MMO has had fans and players around the world since its release in 2017. After posting this barely 60-second clip on Reddit the Xbox insiders a media that is supposed to allow all players to be able to share their personal experiences. 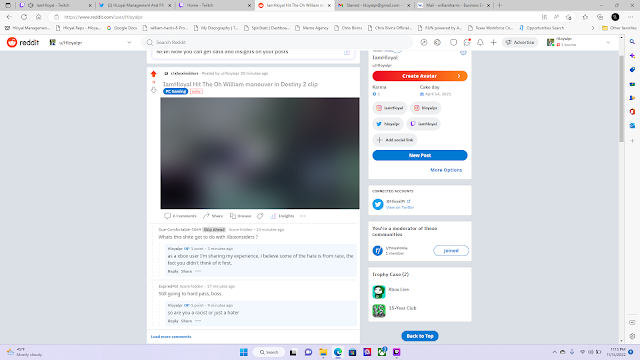 But After his approved post went to the top via medium less than 17 minutes after being released the moderators decide that it wasn't a proper fit. With at least 300 viewers at the time and the quality of another video, it was clear the way some shady behavior from the moderator. But tangling with the iamhloyal is an experience like any other. Share your thoughts on this?  We will keep you posted as this develops.
Posted by Denice Wells at 10:52 PM