A night with BILLIE HOLIDAY by Christian A. Cheairs 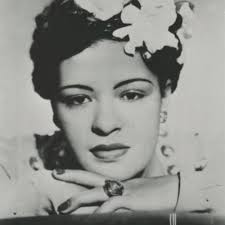 By- Christian A. Cheairs

As I looked in the mirror I wanted to take a knife to the stubborn love handles that reflected on me. Always pudgy, I could now officially say that I was not comfortable in my skin. Quickly I turned off the light in my silent bathroom and put a flame to a lavender incense stick. Trying to quickly weed lately I have found solace in the burning of candles and gentle sips of green tea laced with honey and vanilla. Another prescription for this journey of sobriety has been practicing mindfulness through listening to what I have cited as “old school jazz”. One day while drowning in the genius of Miles Davis station on Pandora the classic voice Holiday interrupted a conscious stream of instrumentals. This initial song would launch me into a Billie Holiday binge of old movie clips and songs that not only impacted our nation but the world. Here are  5 LESSONS I LEARNED DURING A NIGHT WITH LADY DAY:

Life is unfair to deal with that S$#%

Billie Holiday was born Eleanora Harris on April 7th, 1919. Her mother, Sadie was an eighteen-year-old cleaner and her father was a sixteen-year-old guitarist called Clarence Holiday. Her parents were not married and they never even lived together. Billie’s independent spirit was forged by fending for herself on the streets of Baltimore. One night when she was 11 Billie was raped by a neighbor; he was sentenced to three months, but Billie the victim of the crime was punished too. She was sent to the house of Good Shepherd for Colored Girls. Billie’s street-smart ways did not go over well with the nuns. Once she claimed that she was forced to spend the night with the body of a dead girl to teach her a lesson. She would later go on to work in a brothel with her mother. Legend has it that she only broke into singing after being rejected as a stripper. Yeah, believe it or not, Cardi B was not the first one to shatter that glass ceiling. However, Cardi B emerges from a tradition of feisty artists like Holiday who would take life as it was dealt to them with no mercy or apologies.

When examining the life of Lady Day what makes her the sexiest is not her enchanting haunted voice or the signature flower that she wore in the corner of her hair. However, it is how unapologetic she is about her flaws. Photographs of the late singer show track marks coupled alongside her body. She was naked and truly unashamed. “All of me… why not take all of me... Can’t you see?” These lyrics capture the insecurities I have with my black body. Her words felt like a prayer that finally was encapsulated in a jar of sweet raw vulnerability.

I Sing What the Fuck I Want:

Hardly thanks to the movie of her life Lady Sings the Blues she has come to be seen as a sad victim, a weak woman buffeted by forces out of her control that eventually swept her away. That is not the real Billie Holiday. “I sing what the fuck I want” is a sound bite from Andra Day’s portrayal in the new biopic of her life The United States Vs. Billie Holiday, however, is a more accurate tune. Billie Holiday contrary to popular belief did not have a sad or tragic life, but she lived life on her terms moving into her black girl magic agency. She did as she pleased. She made a lot of money and spent it all. She never took any shit off anybody; quite frankly singing what the fuck she wanted.

Demand and command Your Space At all Costs:

During my night with Billie, I simply just caught a vibe. First, I rolled a blunt and listened to her song Strange fruit five times. While listening I tried to picture my great uncle running from Mississippi trying to dip and dodge a lynching rope. In 1940 Holiday was targeted by the government to racialize the war on drugs, ultimately aiming to stop her from singing her controversial song, Strange Fruit. Lynching was a very controversial and scandalous topic and seeped into the consciousness of Black America. When she used to sing this song people would get very angry and indignant. One guy stood up when she sang the song and said, “Billie you wanna see some strange fruit … I got some strange fruit,” he says while flashing an obscene picture. To this vulgar action, Holiday picked up a chair and hit it over the head with it. One of Holiday’s intriguing lore that’s cemented in her legacy was her ability to demand and command respect at all times at all costs.

It is okay to want love; just don’t let it break you

Weed, alcohol, heroin, men, and women were supplements Holiday often used on her quest to find love. She dated tar black pimps to vanilla wafer white Hollywood starlets. She makes about a thousand dollars a week which is a lot of money in the 40s hell it ain't bad for right now; I’m just saying and spends it all on drugs. I’m convinced the same pull that made me want this lady was the same thing that pulled them. Like one of her lovers, I wrestled with Billie all night long trying to figure out why she needed to be touched so badly that she would take brutal beatings that left her body bruised and fall into the bondage of addiction that would ultimately leave her broken. “I will give you my soul just to call you my own'', she says in her songs. A deadly deal of murky waters that we all so often find ourselves navigating.

God Bless the Child that Has His Own

I tried to watch Lady Sings the Blues but didn't know if I wanted to learn about Billie through Diana Ross’ bad acting so I scrapped that idea and just settled for a BBC documentary instead. Then I managed to stumble upon her rendition of God Bless the Child and realized that I was the American Dream my mom and dad always wanted for my life. Papa may have… Mama may have... But God bless the child that has his own! For a brief moment in the pit of the night, I was able to find salvific salvation in her sweet melodies.

Posted by Denice Wells at 8:19 AM No comments: